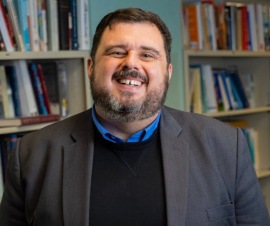 Dustin Friedman is Associate Professor in the Department of Literature at American University in Washington, D.C. and co-director of the M.A. in Literature, Culture, and Technology.

His fields of research and teaching are Victorian and modernist literature, aestheticism and Decadence, queer theory, the history and theory of aesthetics, and global nineteenth-century writing.

His book Before Queer Theory: Victorian Aestheticism and the Self (Johns Hopkins University Press, 2019) explores the intersection between artistic experience and homoerotic desire in the writings of aesthetes such as Walter Pater, Oscar Wilde, Vernon Lee (Violet Paget), and the Michael Field poets (Katharine Bradley and Edith Cooper). He has also begun work on a project that examines mythopoesis, aesthetics, and universalism at the fin de siècle.

Friedman’s writings have appeared or are forthcoming in Modernism/modernity, Victorian Studies, Pedagogy, Feminist Modernist Studies,  jml: Journal of Modern Literature, ELH, Studies in Romanticism, Literature Compass, and Studies in Walter Pater and Aestheticism. He has presented his work at conferences in Rome, Hong Kong, Auckland, London, York, and throughout the United States and Canada. He previously taught in the department of English Language and Literature at the National University of Singapore and in the department of English at UCLA, where he also taught courses in LGBT and Gender Studies.

More information can be found on his faculty profile page.